Behind the Curtain – Week Four Photography 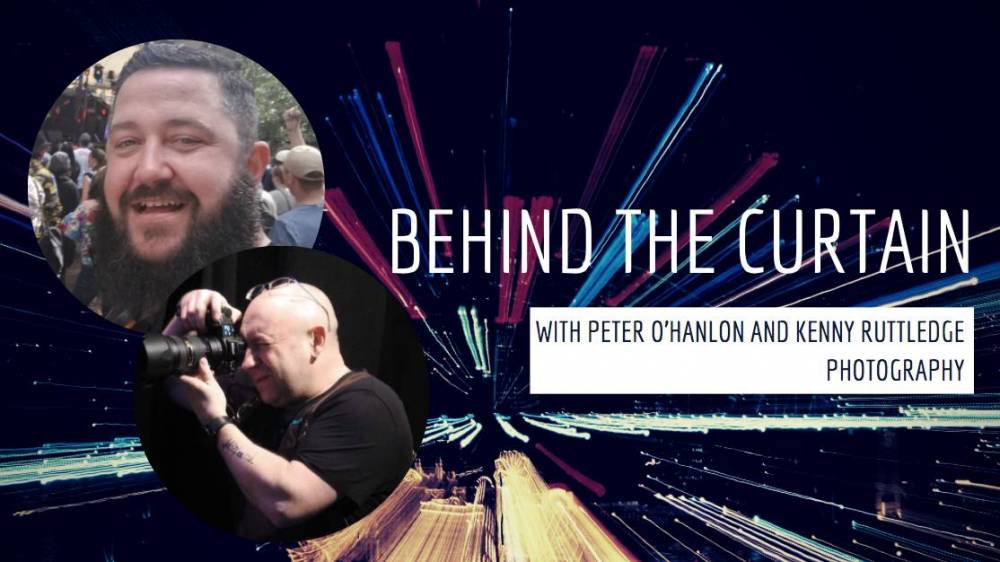 Behind the Curtain – Week Four Photography

Ever wondered what it’s like to get a media pass and photograph a gig? Great news, this week we interviewed two of our amazing photographers Peter O’Hanlon and Kenny Ruttledge. Check it out below ↓

Alright both, what is your area of expertise?

Peter: I’d say my most favoured area of photography is live music photography, but lately I have been dabbling in studio photography and I’m really liking it.

Kenny: I love photographing gigs and performances as well. It’s great because every shot is different due to the lighting and movement.

How and why did you get into this line of work?

Peter: I have always had a love for music and would have loved to have been in a band, but the total inability to hold a note and not having the patience to learn an instrument ruled that out, so photography was my only way of getting close to a stage.

Kenny: A lot of my friends are all musicians, so I was always going to gigs with them. As I was always into photography, I started bringing along my camera. I think I shot my first gig 2009 in the Sky&The Ground.

What does an average evening at Spiegeltent look like for you?

Peter: Unlike most of the guys working at the festival I get to turn up quite late. I just really need to be there before the artists take to the stage. We usually only get to photograph the first 3 songs of a gig, so after that we are done shooting unless there are some meet and greet photos to be done.

Kenny: Yeah, a normal day would be arriving about an hour before the show to see what the artists want. Most acts only want you around for the first 3 songs some others it could be 2nd, 3rd and 4th song. It all depends on the act. Some acts don’t mind you shoot all night! Most times you get to meet the band as well, which is great.

What performance at Spiegeltent has been your favourite to shoot, and why?

Peter: That’s a tough one…. I always love the Wexford Artists nights and the burlesque shows, but I loved Lisa Hannigan a few years back. I think the Spiegeltent was made for artists like that. You could hear a pin drop that night.

Kenny: My personal favourite has been Sinead O’Connor. I grew up as a massive fan of hers I remember the day Brian rang me to say he had her booked for the Spiegeltent. I couldn’t believe it!

Brian had also arranged for me to meet her after the gig and get a photo with her, it’s a night I’ll never forget.

What artist has been your favourite to shoot throughout your career and why?

Peter: I have had some special ones: Slayers last tour was amazing to shoot, the Stones in Croke Park was fantastic, Gun’s and Roses in Slane, just to be up front and look back up the hill would give you an amazing feeling. But my favourite and I don’t think it will ever be topped was the Foo Fighters in Belfast last year, I have been a Foos fan from the start and Dave Grohl is one of the best front men. They were top of my bucket list and I was thrilled to get the chance to shoot them. I did go a bit fan boy when they came on stage but I snapped out of it and enjoyed every minute of the 3 songs we got to photograph.

Kenny: For me it has to be Wallis Bird. She is just amazing to photograph, and off stage she is the one of the nicest people you could meet. I’ve gotten to know her really well since I started taking photos and we have become great friends and regularly meet up when she’s home. She has also invited me to shoot a few of her gigs in Europe, so hopefully when things get back to normal, I’ll be doing that.

Who has been the most difficult to shoot throughout your career and why?

Peter: Some artists have very strange rules when it comes to photographing them, like only shooting from the extreme right or left hand side of the stage, shooting from way in the back of a venue, or being given 40 seconds to shoot them. There are some strange ones. Hard to pick just one!

Kenny: No one for me yet, actually!

What artist would you want the opportunity to photograph in future?

Peter: The Foo Fighters were top of my bucket list so after them I’d love to shoot Coldplay.

Kenny: It would have to be U2. I’ve been a massive fan all my life. I’ve seen them live so many times but it’s just so hard to get a media pass. Hopefully before they stop touring I might get the chance!

Peter: Since there has been no gigs over the summer I have been shooting a lot of studio and location photography. At the moment I’m doing a series of twisted fairy tales. They are lot of fun to do.

Kenny: I love photographing people having a good time, really natural pictures. I’m not great at getting people to pose for shots. I also love heading out with the lads and doing some landscape.

Can people hire you for photography and do you have social platforms or a website where people can view your photos/images?

How has COVID 19 impacted your industry, and what do you expect from the future?

Peter: I’m in the very lucky situation that photography is not my main source of income. But speaking to friends who rely on it for their sole income it has been very tough on them. The whole

industry has suffered so much during this. I don’t think people realise just how many people make their living from concerts, festivals, gigs and shows. The industry is in total limbo at the moment. There is no sign of anything happening soon and no help from the government on the horizon. During lock down it was the music and performance industry that put on so many free shows to keep people’s mind off what was going on. The government should step-up and help out one of our best exports.

Kenny: Yeah it’s been a tough year for everyone involved in the music scene so many musicians make their money on touring and merch. Not to mention all the time and effort the promoters put into it and the venues. Who knows what will happen, but I know the people behind a lot of the gigs will be doing their best to get the show back on the road in the safest possible way!

Sign up to our newsletter here to get all the news on our upcoming gigs and festivals straight to your inbox.