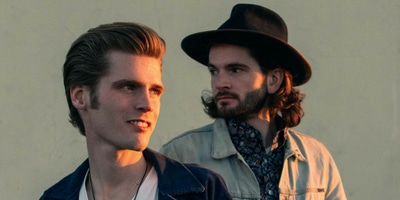 The brothers are back, as promised, following an electric show at last years festival.

*Tickets on sale Friday 29th June at 9am*

**This is a standing show and strictly over 18’s only**

Irish duo, brothers Harry and Alfie Hudson Taylor, have just released their ‘Feel It Again’ EP. Their first new music since their album “Singing for Strangers” debuted in 2015.  The EP, which charted Top 5 in the Irish album charts, gives their fans the first taste of Hudson Taylor’s forthcoming second album, which has been produced by Ryan Hadlock, best known for his work with The Lumineers and Vance Joy, and is being mixed by Ruadhri Cushnan (Mumford & Son, Ed Sheeran).

Building on the success of the debut album, which was produced by Iain Archer (James Bay, Jake Bugg), and featured three big hits – ‘Chasing Rubies’, ‘Battles’ and ‘Weapons’; the multi-talented siblings enjoyed a busy 2017. They played to one of the biggest crowds of the weekend at the Electric Picnic festival in September, and their lead-off Irish single “Feel It Again” was one of the biggest national airplay hits of 2017. Hudson Taylor rounded off the year with a sold out headline tour.

Barely pausing for breath, 2018 has seen the brothers on a sold out headline tour of the UK and Europe, and an exciting US tour with Gabrielle Aplin. The US trip saw them make their US TV debut on Good Day New York on Fox and WGN-TV in Chicago. They also completed high-profile online sessions for Paste Magazine, Baeble Music and Balcony TV in LA.

Returning to Ireland to find second single ‘Run With Me’ in the airplay Top 10, and streaming figures well in excess of one million plays for both that track and aching acoustic ballad ‘Old Soul’, Hudson Taylor wrapped an action-packed Irish tour with a sold out, home town show at The Olympia Theatre in Dublin.

Currently gearing up for a busy summer of festival spots in the UK, Ireland and continental Europe, we are delighted to have the lads back at Wexford Spiegeltent Festival in October.

Listen to the Feel It Again Acoustic EP here.