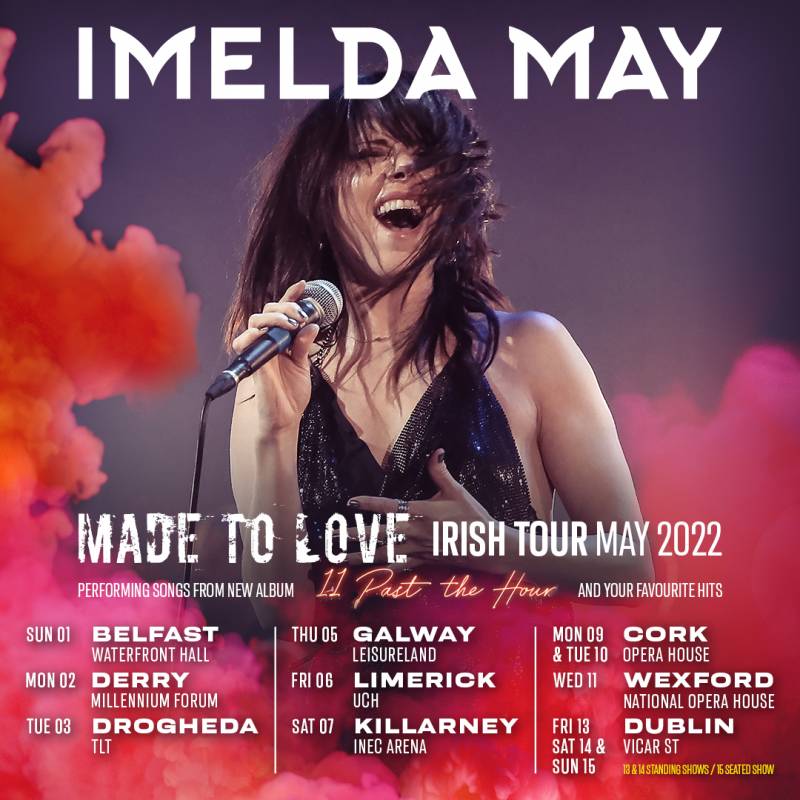 ANNOUNCES MADE TO LOVE APRIL 2022 TOUR

Globally revered artist Imelda May has today announced her first major tour in over five years in support of her highly anticipated new album ‘11 Past The Hour’.

Superstar singer and songwriter Imelda’s sixth studio album ‘11 Past The Hour’ – her first new music in four years – is a record that brims with sensuality, emotional intelligence, spirituality and intuition, marking a new chapter for Imelda and showcasing her at her most authentic. With pals and collaborators like Ronnie Wood, Noel Gallagher, Miles Kane & Niall McNamee, and with inspired contributions from feminist thinkers and activists such as Gina Martin and Dr Shola Mos-Shogbamimu, the album is an invigorating blast of rock’n’roll, with a purpose.

Imelda says: “I cannot wait to see you all again, to dance and sing together, to connect and feel the sparkle in a room where music makes us feel alive and elevated for a while. A magical feeling we can only get from live music. Let’s go!!!!”

The Daily Mail’s 4 star album review on Sunday proclaimed “The whole album is crying out to be performed live. She could get a party started in a convent”.

Imelda May’s tour will see her perform songs from her new album ‘11 Past The Hour’ and most celebrated tracks from her incredible repertoire, showcasing Imelda’s unique ability to evoke the purest of emotion using her voice as her sole instrument.

Her last headline tour in 2017 received rave reviews such as Metro’s “It was like the Irish stars had aligned for a perfect moment creating rock and roll gold” & The Evening Standard’s “May’s wild side was worth the wait, though her mature reinvention was the evening’s real triumph”.

Born and raised in The Liberties area of Dublin, Imelda has become one of Ireland’s most famed female artists in history. Discovered by Jools Holland, who asked Imelda to go on tour with him, Imelda has gone on to perform duets with artists including U2, Lou Reed, Sinead O Connor, Robert Plant, Van Morrison, Jack Savoretti and Elvis Costello and has featured on recent albums and live tours with Jeff Beck, Jeff Goldblum and Ronnie Wood.

Her last album landed at No.5 in the UK Official Album Chart and she can count such artists as Bob Dylan and Bono amongst her fans. Last year, her 2008 album ‘Love Tattoo’ was named the bestselling album of modern chart history by a homegrown female Irish artist by the Official Charts Company. Last summer, Imelda released her debut poetry EP ‘Slip of the Tongue’ to widespread critical acclaim and received global recognition for her poem ‘You Don’t Get To Be Racist and Irish’ used by the Irish government’s ReThink Ireland campaign for billboards across the country.

Imelda will perform at Wexford’s Opera House May 11th 2022.