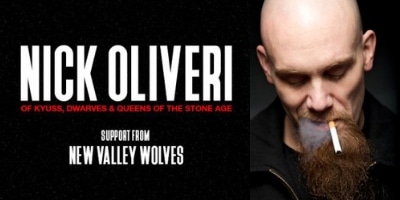 This is a standing show and strictly over 18’s only.

Nick Oliveri AKA ‘The Rock N Roll Komodo Dragon’ regarded world over as one of the greatest rock musicians. From his work on albums like Kyuss’ ‘Blues For The Red Sun’ to being a core contributor to Queens of the Stone Age from 1998 to 2004, playing bass and providing backup and lead vocals on two of the band’s biggest albums, Rated R and Songs for the Deaf, in addition to co-writing most of the album’s songs with band mate Josh Homme, Oliveri’s chops are undisputed.

Oliveri’s lead singing can be heard on Queens songs such as “Auto Pilot”, “Tension Head” and “Quick and to the Pointless” from Rated R and “Another Love Song”, “Gonna Leave You”, “Six Shooter” and “You Think I Ain’t Worth a Dollar but I Feel Like a Millionaire,” from Songs for the Deaf.

Most recently Oliveri is fronting Mondo Generator a project he started in 97′ with Josh Homme, Brant Bjork, Rob Oswald and Karl Doyle. Oliveri is also current bass player with Dwarves.

This is an acoustic show where Nick will be doing versions of different songs through his career as well as a never before seen acoustic show from New Valley Wolves.