Stand Up for Ukraine 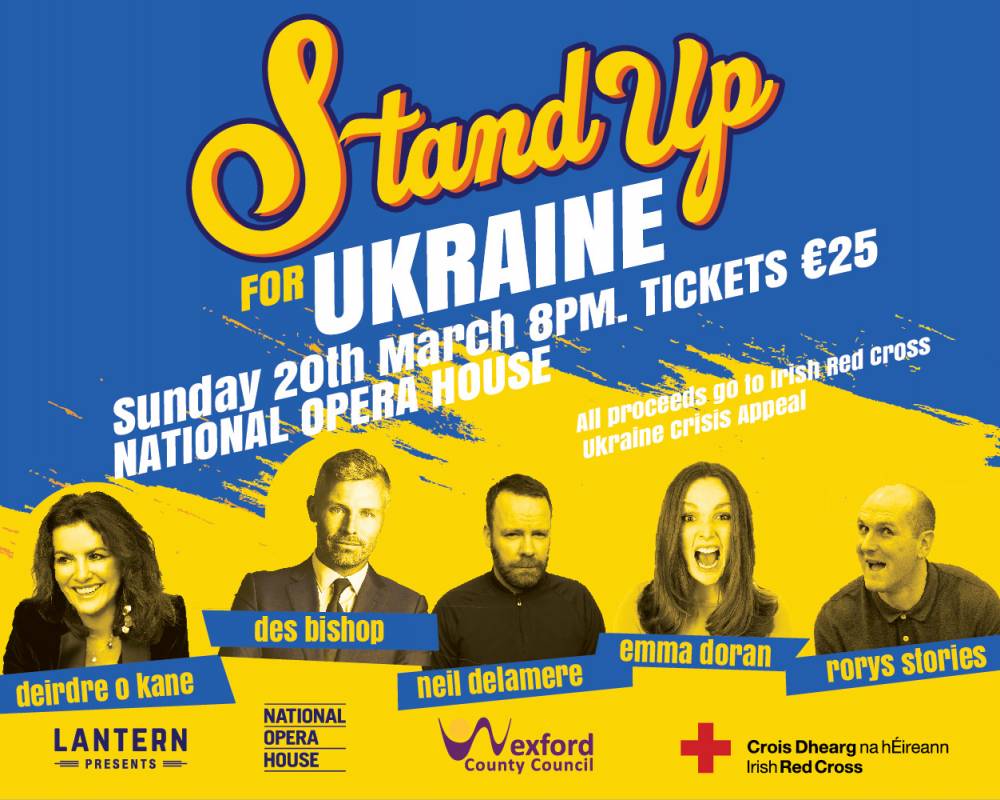 It is time to stand together and stand up for Ukraine.

In a time when many people and organisations are doing their bit to help those fleeing war-torn Ukraine, some of Ireland’s leading comedians are doing what they do best to play their part.

‘Stand Up for Ukraine’ will take place at the National Opera House on Sunday, March 20th at 8pm and promises to be a very special night.

An extraordinary line-up, including Neil Delamere, Des Bishop, Deirdre O’Kane, Rory’s Stories and Emma Doran will take to the stage to entertain, while supporting those most in need.  100% of ticket sales from this event will be donated to The Irish Red Cross Ukraine Appeal.

Tickets for Stand Up for Ukraine are €25 and are on sale now from lantern.ie and nationaloperahouse.ie.

Can’t go? You can still do your part by donating here https://donate.redcross.ie

Award-winning comedian Neil Delamere is one of the top acts working in the Irish comedy scene today, well known to audiences for his regular television appearances on RTE and the BBC as well as his hilarious sell-out stand up tours.

Now a huge star in Ireland, Des Bishop and his career can only be described as admirable. The openness and honesty of his presenting style combined with his restless imagination and perceptive comic observations make Des Bishop a must-see for fans of unique, insightful and provocative comedy.

Deirdre O’ Kane has really hit her stride; footloose from a glittering turn on Dancing with the Stars and hosting her own show ‘The Deidre O’Kane Show’ on Sky, don’t miss Deirdre at her hilarious best in a straight-talking look back at the last twelve frantic months.

One of Ireland’s most exciting emerging talents, Emma Doran is a comedian, blogger and self-proclaimed chancer. Her stand up and sketches have racked up hundreds of thousands of hits on some of the country’s most popular sites. Dry and sarcastic she firmly has her finger on the pulse of society and is wickedly funny.

Rory O’Connor is a stand-up comedian and best selling author, but you may know him as his hilarious online and social media personality, Rory’s Stories.  Rory takes a comedic and relatable look at all aspects of what it means to be Irish – always looking at the lighter side of life, he provides his audiences with plenty of laughs along the way.