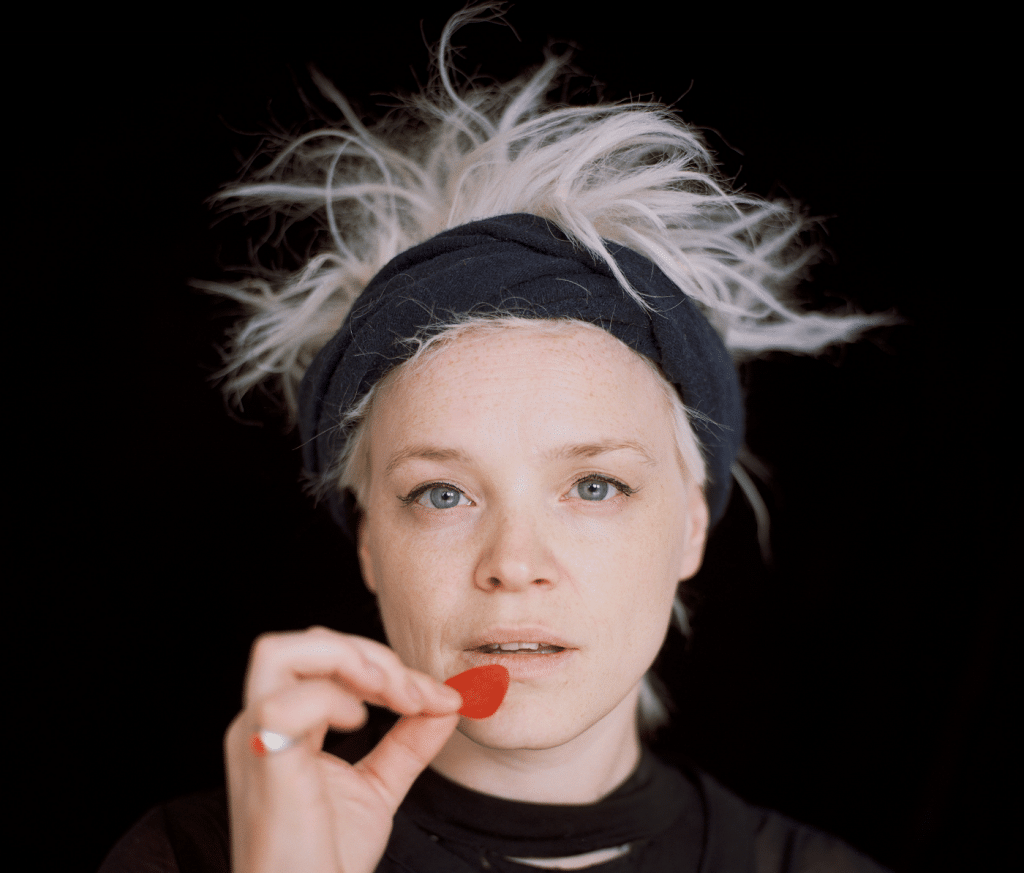 This is a Standing Show – Balcony seats allocated on a first come, first served basis.  Doors and full bar open 45 minutes before the show.

Wallis Bird had been quietly working away on her fifth album for the best part of eighteen months when, last November, she was asked to play a new track. Since her first album, she’d normally written while on tour, road-testing her songs as she travelled, but, following the lengthy campaign behind her last collection, Architect, – which brought her to some 25,000 people, culminating in a Japanese tour – her management had instead encouraged her to take a break and take her time. The ensuing process had been a joy, but her friend’s request, when it came, unexpectedly floored her. “I totally froze,” Bird confesses. “I had zero confidence in what I was doing. I’d been alone in my studio, in my own head, for too long.”

Bird did the only thing she could think of: she set up a show. This wasn’t any ordinary gig, though, nothing like the countless ones she’d been playing since she first started performing in the early 2000s. She’d had a better idea. “I figured a 12 hour free concert would fix all the issues I had,” she laughs, but she’s not joking. She stepped onto the stage of Berlin’s Auster Club at 1.30pm on January 9th, 2016, and stayed there until the early hours of the morning, raising funds for refugee charities at the same time. Afterwards, she even played two encores. “It was terrifying, demanding, hypnotic, awful, bullshit, funny, sweet, homely, meandering, but ultimately beautiful. By the seventh or eighth hour, my friends had begun joining me on stage, and we tore the place apart! I was OK after that: I learned a lot!”

To most people, such an act might seem unthinkable, but to Wallis Bird, the unthinkable is often what she’s pursued. This is evident on Home, her brand new album, a collection that encompasses a vast range of styles and moods without ever sacrificing the indelible character at its centre. From ‘Change’ – the last song she wrote, but nonetheless her favourite – which opens the album in a deceptively downbeat fashion before blossoming into something truly joyous, to the serene reflection of the closing ‘Seasons’; via the celebration of friendship at the heart of ‘That Leads The Way’; and the intimate, almost R&B feel of ‘The Deep Reveal’; Bird appears utterly fearless. She even makes space for friends to join her on the irresistibly jubilant ‘Love’, and yet the album’s title track finds her stripping things right back, singing a cappella in the Irish Sean Nós style. At times, one feels, there’s nothing she’s not prepared to try.

Of course, little about Bird is typical. For starters, she doesn’t conform to artist stereotypes, having spent her childhood blissfully happy in Wexford, Ireland. “Man, I only have great things to say about my growing up,” she beams. “Loads of noise, loads of character, lots of twists and turns, craziness, comfort, sneaking, rowing, hugging… Never any hunger, physically or mentally. My parents are relaxed about the big things in life. They’ve taken huge risks: owned a shop, a pub, a farm; they were DJs, music bookers, insurance brokers, cleaners, restaurateurs, you name it… They were never scared to work, never judged their success on their status, and were never scared to go against the grain. They allowed us to make mistakes and try shit out. They let me jump into music and not into college or a job.”

This last fact is, perhaps, even more remarkable given that, at the age of 18 months, Bird lost what could be politely described as an ‘ill-advised’ battle with a lawnmower, resulting in the loss of a finger on her left hand. (The other four were fortunately saved by surgery.) Her reaction was typically indomitable: as someone who’d been playing the guitar since she was six months old – and she has the pictures to prove it! – she simply made the best of what, to many people, would have been a catastrophe. “I learned to play with what I had,” she states simply. “There’s really no other way to express this: I was put on this earth to let music channel through my body. If it resonates, I’ll fuckin’ play it! To me there is nothing inanimate in this world. Everything has a song to sing.”

And so, as soon as she’d left school, Bird headed towards the Irish capital, studying songwriting by day and performing shows by night. At the age of 23 she moved to Germany for a year, and enjoyed success with her debut single, ‘Blossoms In The Street’ (2006), which spent twenty weeks in the German airplay charts and earned her a deal with Island Records in the UK. She moved next to London, releasing her debut album, Spoons, in 2008, while New Boots, its 2009 follow-up (for Columbia Records), earned her a Meteor Award as Best Newcomer. Each release was accompanied by heavy touring – including shows with acts as diverse as The Gossip, Billy Bragg and Emiliana Torrini – as was a third, self-titled album in 2012, for which she picked up another Meteor, this time as Best Female Artist, as well as a Choice Music Prize nomination. That same year, disenchanted with London, she returned to Germany and settled in Berlin.

Bird’s last album, her fourth – 2014’s Architect – celebrated this relocation, and its electronic dabblings also represented, she admits with a chuckle, “the story of the newly single 30 year old me indulging in Berlin.” But while Home, deliberately or not, picks up where it left off, and its foundation – to some, at least – may seem unconventional, this isn’t a familiar ‘Berlin album’, with its decadent protagonist found nursing a hangover or, worse still, a habit. No, Bird continues, grinning: Home is pretty much the opposite of that. “Architect was the blueprint to this great life and musical plan I was hatching: ‘girl meets girl, girl falls in love and happy ending ensues’. Home is the happy ending!”

Indeed, Home is such a celebration of the love Bird now enjoys with her muse and partner that she not only refers to it as a “thank you letter” but its cover also features the two of them locked in an affectionate embrace. That she wears her heart on her (record) sleeve is perhaps unfashionable, but it’s certainly not uncharacteristic of Bird, especially given the album’s lyrical content. Take the full-blooded ‘ODOM’, about “falling insanely in love”, in which Bird announces “You’re hotter than a hot thing on a hot day” or the cosy ‘Home’, where she promises “I’m not good for you now/ I’m good for you forever”, recalling fondly how, “Over drinks and songs and ‘Dad’ jokes/ I kept touching your hand for your attention”. That’s not to mention ‘Love’ and its straightforward declaration, shared with friends in the studio, that “The stars are ringing/ And the trees are buzzing/ And I’m full of love.”