Home / News / Featured, Lantern / Behind the Curtain – Week One with Paul Walsh and Danielle Reck

Behind the Curtain – Week One with Paul Walsh and Danielle Reck 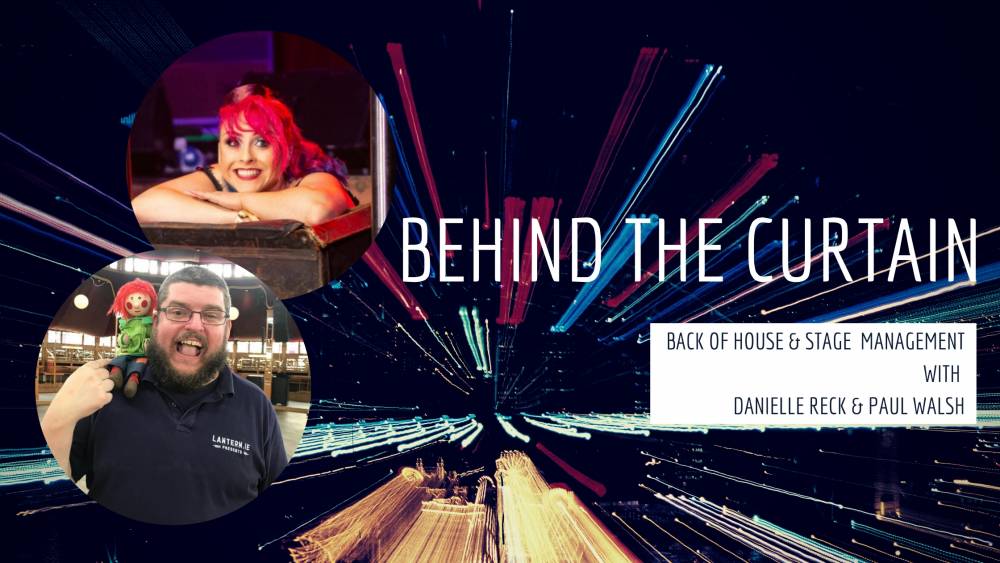 Behind the Curtain – Week One with Paul Walsh and Danielle Reck

This week in ‘Behind the Curtain’ we interview Danielle Reck and Paul Walsh, Back of House and Stage Management at Wexford Spiegeltent Festival and find out why Smokie has one of the best and “cutest” riders to date. 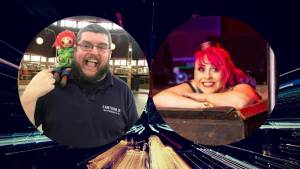 What does an average day/evening look like when running the green room at Wexford Spiegeltent Festival?

[Danielle]: No two days at the Spiegeltent are alike, but each day comes with its own rewards and challenges. Depending on the scheduled events for the day my arrival times vary but usually I start with a general top and tail around mid-morning. This includes a clean-up from the previous night, topping up on refreshments from the basic festival rider and if there any addition rider requests these must be acquired before the tech crew, tour managers and artists are on site.

Once the crew, tour managers and artists arrive at the venue I liaise with them and give them a tour of the backstage area, introducing them to Paul (stage manager) and directing them to their dressing rooms as well as hand over backstage wristbands which are essential for accessing the area.

Once the artists have done their soundcheck there may be a small bit of down time and this is when I start working on the following days rider requests. Once the shows are on, the most important part of my job is to make sure that everyone is relaxed and have what they need to ensure a worry-free show.

After the events for the evening are over, I do a quick clean around before heading home, sometimes well after midnight to rest before doing it all again the next day!

Have you ever had any strange or unique requests on an artist’s rider?

[Danielle] I really enjoyed Smokie’s rider. It included all the usual expected requests from a seasoned bad–ass rock band, but they also requested lots of Haribo Jellies which I thought was so cute.

What is something you would have to have on your own rider if you’re performing at Wexford Spiegeltent?

[Danielle] Well, having had the fantastic opportunity to perform in the Spiegeltent Festival on 2 occasions last year, I distinctly remember requesting that the green room have rescued battery hens in knitted jumpers for me to cuddle. Unfortunately, I was not able to acquire these, though I’m pretty sure the other artists would really appreciate them as much as me ?!

[Paul] I’ve also performed in the Wexford Spiegeltent and my “demands” have been very reasonable. Bucket loads of coke zero on ice and an ice-cold beer for when I finish my set.

Who has been your favourite artists that you’ve met over the years working for the festival and why?

[Danielle] My favourite artists to have met is Hudson Taylor. I am a huge Hudson Taylor fan. I was so excited for the gig which unfortunately had to be postponed until the end of the festival as Alfie was unwell.

I am quite impressed at how I managed to not fan girl obsessively. I chatted with them and made sure they had everything they needed throughout the day as cool as a cucumber. All went well until they took a photo with me at the end of the night. I melted into a puddle while all the Spiegeltent team looked on in amusement and laughed.

I also loved John Bishop. Such a wonderfully kindhearted, friendly and genuinely humble man. Sharing drinks and discussing veganism with him and the Spiegeltent team after his gig was a lovely experience.

[Paul] Since I was 9 I have been obsessed with Brendan Grace. He’s one of my all-time comedy influences and getting to meet him was a huge thrill. Then when he turned out to be a pure gentleman was the icing on the cake. He brought me on-stage with him and told the audience I was his son! Genuinely in the top 5 moments of my life. 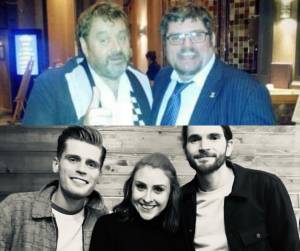 Who is an artist that has surprised you?

[Danielle] The artists that surprised me the most were Smokie. I had heard a lot of their hit songs over the years but never though that I would get so caught up in their onstage charisma and showmanship. The atmosphere was electric and filled with pure joyous energy.

[Paul] The artist that surprised me the most was Sinead O’Connor. I really didn’t know what to expect and was surprised to find out that she’s one of the most down to earth, humble people that I’ve met. And even though I’ve heard her sing on tv and radio, standing ten feet away from her as she sang “Nothing Compares to You” sent shivers down my spine. It still does.

An artist you would love to work with in future and why?

[Danielle] I would love to work with ‘The Scratch’. They are an incredible young Irish act that mixes traditional Irish music with a commentary on modern Irish ideals. Their gigs are electric, and the boys are also great craic and lovely humans.

[Paul] Tim Minchin is an artist I would love to see in the Spiegeltent. As a writer of comedy music, I’ve a huge respect for what he does and if I could be so bold, I’d love to see my alter ego, Baroness Von Boomdea, appear with him!

What does stage management entail and what does an average night look like?

[Paul] No two days in the Spiegeltent are ever the same. My usual day starts between 10 and 11am, I open the tent and liaise with the cleaning staff and tech crew. I then meet with green room manager, Danielle, and we make sure everything is in order for the days act. I meet the incoming crew and acts and introduce them to Danielle and the tech crew. During the tech set up I generally check on the seating arrangement for that evening, make sure the sound check goes correctly and while the visitors have a break I check the safety features on site and the fire exits, etc. Early evening, I liaise with the volunteers, FOH staff, security and bar staff on times and upcoming issues. I then check with Brian and Danielle that we are ready to open the house. I give the acts their calls and try to start the show as close to the advertised time as I can. During and after the show I liaise with the greenroom on anything the acts need. Once the show is over I supervise the get–out and clean up so the tent is ready for the next day. On a weekday we generally leave the site between 12-1am, on weekends usually between 2-3am. Always different, always challenging, always fun.

If you weren’t involved in an event like Spiegeltent, what would the audience notice to be missing/lacking?

[Danielle] If I wasn’t involved, I’m pretty sure there would be a distinct lack of a smiley, unicorn haired lady waiting backstage. But seriously, I think the atmosphere created for the artists and the crew impacts their performance. Each and every one of the acts last year commented on how cool an area we all had created for them and how welcome they felt. I think these positive vibes transfers onto the stage with the artist and directly impacts the quality of the show.

[Paul] I like to think that I bring a little bit of humour and craic to the tent. Over the last few years, we the on-site staff have become like a little family and I wouldn’t like to do it with anyone else. I hope they feel the same.

[Lantern Presents] We do Paul, we do.

What have you been up to during COVID19 and what do you do when you’re not running BOH and doing stage management?

[Danielle] When I am not running BOH I am generally performing myself. Traveling the length and breadth of the country with my aerial, burlesque, fire or acting performances as ‘Missy Fortune Performance.’ I also produce high quality and inclusive cabarets with my co- producer under the name ‘Hit & Missy Productions’. COVID19 has had a huge impact on my business and ability to entertain & produce. I have mostly been doing a lot of promotional photo shoots, creating new acts and working on building my own skills. One project in which I was delighted to have been part of during quarantine was an online cabaret to raise funds for performers within our community who are struggling financially due to the direct impact of COVID 19

The Spiegeltent Festival is a genuinely magical time in Wexford and the atmosphere and vibes it creates around the town are infectious. It is something very special and is laced with moments of pure magic and wonder for audiences/ artists and anyone who has the opportunity to work in it. My most magical moment however was when I watched my first live wrestling show.

OTT wrestling was a big eye opener for me! I have always adored the world of professional wrestling and dreamed of being in the ring standing on the corner buckle holding a belt above my head in front of a chanting crowd. These guys and gals are incredible. Hard working and a huge welcoming family. When I saw the show in the Spiegeltent Festival last year I decided that I had to do it, it was what I was born to do. The promoter, Joe gave me his card and I haven’t looked back since. I now train with the ‘School of Irish Wrestling’ and dream of the day when I get to lay the smackdown in my hometown inside of the incredibly beautiful venue that is the Wexford  Spiegeltent.

[Paul] I’ve started an online course in Parapsychology which is an area I’m hugely interested in. When not involved in the Spiegeltent festival I direct, act in and write plays. I’ve also recently started performing a drag act, “Baroness VonBoomdea“, and run burlesque cabarets in Wexford Town under “Hit and Missy Productions.” I also work in Loftus Hall and am a close friend of Santa.

Sign up to our newsletter here to get all the news on our upcoming gigs and festivals straight to your inbox.